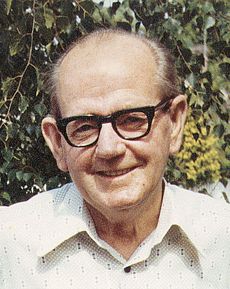 Thomas Ambrose Bowen (1916 – 1982) devoted a lifetime to developing his gentle and innovative technique in Geelong, Australia. He started by practising massage for local sports clubs until his practice grew so large he was forced to ‘do something about it’. His concern for his patients’ wellbeing and his lack of interest in money were legendary.

Tom Bowen was not formally trained in any medical or alternative therapy discipline. He stated simply that his work was ‘a gift from God’. In the interview for the Webb Report of 1975, an Australian Government survey on natural therapies, he was observed to be treating some 13,000 patients per year, with a 90% success rate after only one or two treatments. He was known only by word of mouth.

Tom Bowen taught his technique to only a handful of students, including Ossie and Elaine Rentsch, to whom he passed the responsibility of taking it out to the world after his death. Ossie and Elaine have done an admirable job of founding and directing the Bowen Therapy Academy of Australia. They travel the world teaching advanced levels. The Bowen Technique is now being taught in over twenty countries and practiced in over thirty.

As from 2006 the Diploma in Bowen Therapy is nationally recognized training in Australia.

Welcome to the Turkish home of the Original Bowen Technique, or Bowtech, a dynamic system of muscle and connective tissue therapy. Developed in Australia by Tom Bowen, it is now being practised in over thirty countries.

How Does Bowen Work?
The body is in constant motion trying to sustain balance – homeostasis – in every system. It has an innate ability to heal itself if given a chance. However, nothing can heal until the person is relaxed. When the body is in the rest, digest, repair mode (parasympathetic), then the healing process begins, as Bowen asks the body to switch gears and relax into the parasympathetic.

From there Bowen works with the body to open up fascia and release tension in muscles and tendons. This helps re-align bones so that joints can move in full range with ease, allowing more oxygen and blood to circulate. The body cavities then find they have more room so that organs can function better, nerves aren’t pinched, muscles move smoothly and energy flows freely. The lymphatic system is stimulated to remove toxins, bring in nutrients, and improve hydration for better function right down to the single cell. This in turn affects the chemical, hormonal and electrical systems influencing the emotions and thought. All this with gentle contact through the fascia, sensory receptors and the nervous systems of the body.

With thanks to Barbara Gordon http://www.bodyresponse.ca/bowen-hello.html

How Safe is the Bowen Technique?
The Bowen Technique uses such a gentle level of touch that it is considered to be one of the safest of therapies. Indeed, it is so non-invasive and gentle that it is not uncommon for clients to fall asleep during treatment. This gentleness means that it is ideal for use on people of all ages – from newborns through to the elderly – with all manner of problems.

How do I know if a practitioner is qualified?
Practitioners registered with the Bowen Association are entitled to use the letters BTA or BTAA after their name. Training courses consist of a number of practical and written assessments, as well as a complete set of coursework. Many practitioners are already physiotherapists or osteopaths, while others come from a background in sports massage, reflexology or healing.

FAQs taken from “Understanding the Bowen Technique” by John Wilks

Find Bowen practitioners, associations and training around the world.